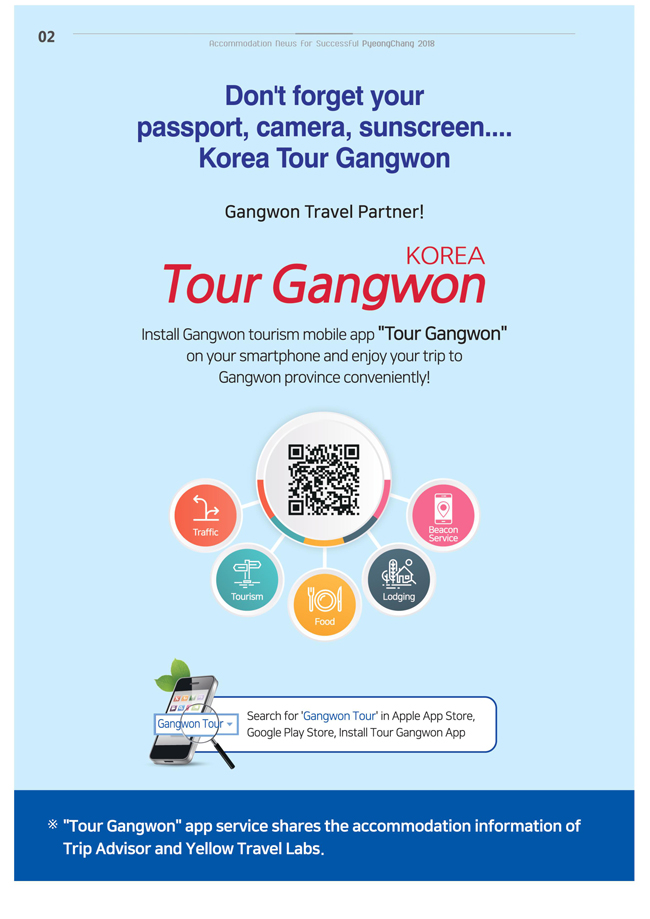 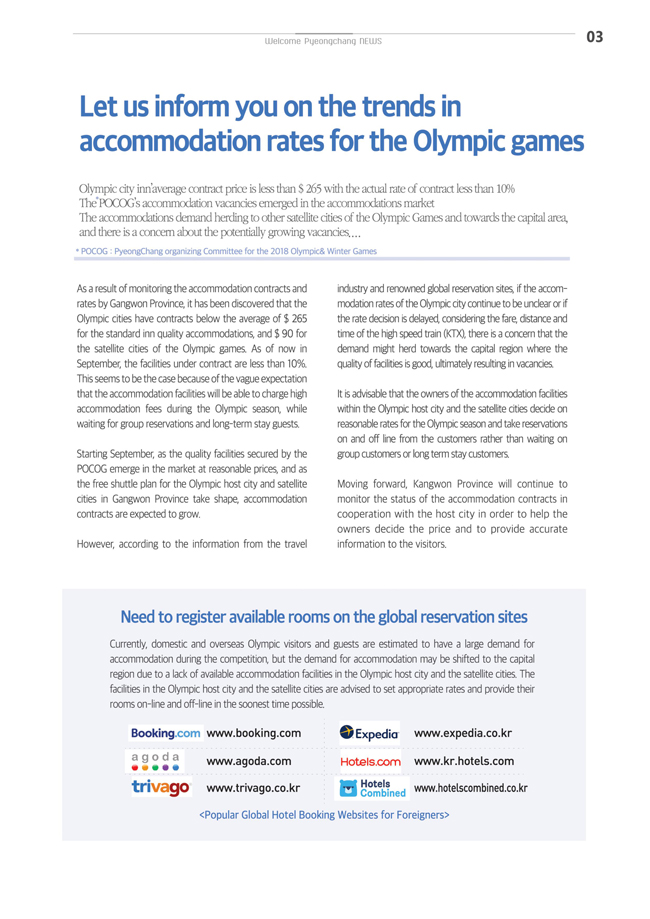 Olympic city inn’average contract price is less than $ 265 with the actual rate of contract less than 10% The POCOG’s accommodation vacancies emerged in the accommodations market The accommodations demand herding to other satellite cities of the Olympic Games and towards the capital area, and there is a concern about the potentially growing vacancies.... * POCOG : PyeongChang organizing Committee for the 2018 Olympic& Winter Games

Starting September, as the quality facilities secured by the POCOG emerge in the market at reasonable prices, and as the free shuttle plan for the Olympic host city and satellite cities in Gangwon Province take shape, accommodation contracts are expected to grow.

However, according to the information from the travel industry and renowned global reservation sites, if the accommodation rates of the Olympic city continue to be unclear or if the rate decision is delayed, considering the fare, distance and time of the high speed train (KTX), there is a concern that the demand might herd towards the capital region where the quality of facilities is good, ultimately resulting in vacancies.

It is advisable that the owners of the accommodation facilities within the Olympic host city and the satellite cities decide on reasonable rates for the Olympic season and take reservations on and off line from the customers rather than waiting on group customers or long term stay customers.

Moving forward, Kangwon Province will continue to monitor the status of the accommodation contracts in cooperation with the host city in order to help the owners decide the price and to provide accurate information to the visitors. 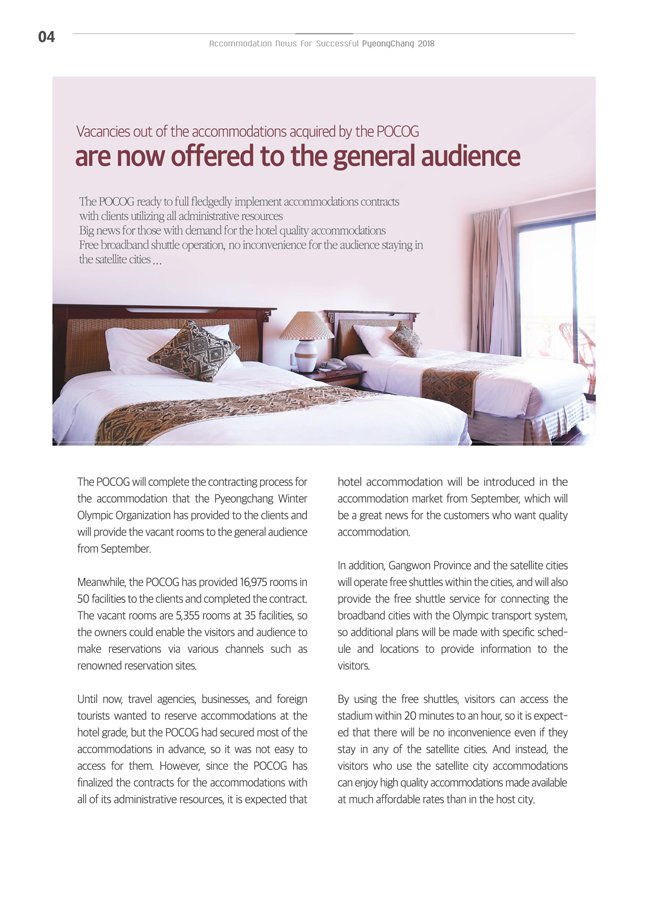 The POCOG ready to full fledgedly implement accommodations contracts with clients utilizing all administrative resources Big news for those with demand for the hotel quality accommodations Free broadband shuttle operation, no inconvenience for the audience staying in the satellite cities ...

The POCOG will complete the contracting process for the accommodation that the Pyeongchang Winter Olympic Organization has provided to the clients and will provide the vacant rooms to the general audience from September.

Meanwhile, the POCOG has provided 16,975 rooms in 50 facilities to the clients and completed the contract. The vacant rooms are 5,355 rooms at 35 facilities, so the owners could enable the visitors and audience to make reservations via various channels such as renowned reservation sites.

In addition, Gangwon Province and the satellite cities will operate free shuttles within the cities, and will also provide the free shuttle service for connecting the broadband cities with the Olympic transport system, so additional plans will be made with specific schedule and locations to provide information to the visitors. 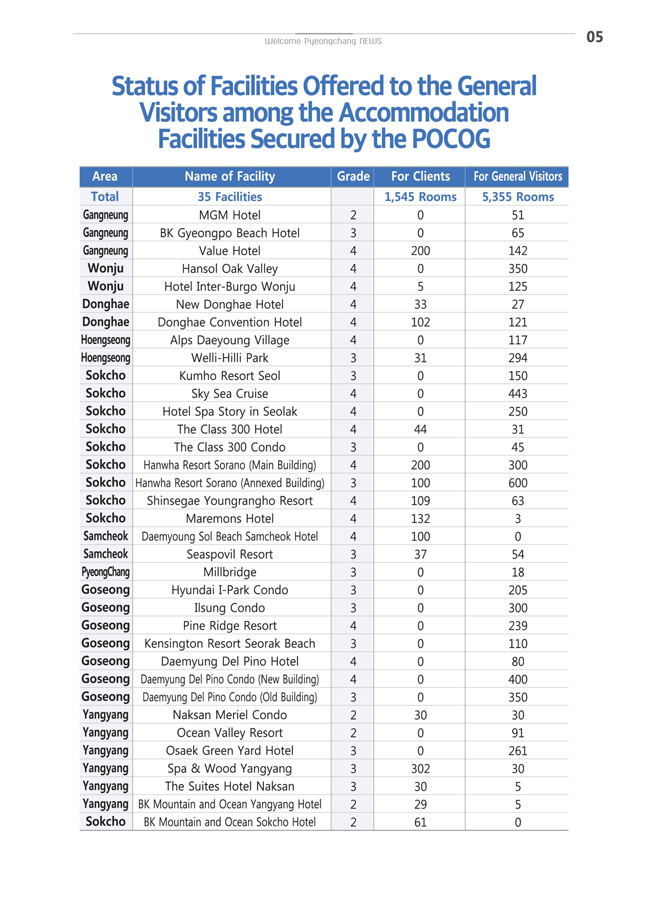 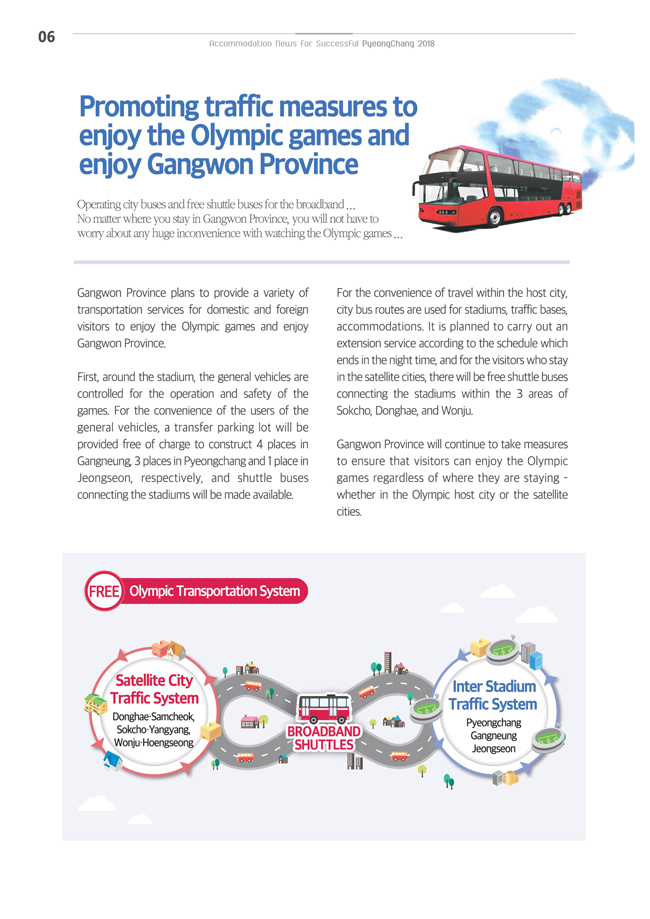 Operating city buses and free shuttle buses for the broadband ... No matter where you stay in Gangwon Province, you will not have to worry about any huge inconvenience with watching the Olympic games ...

Gangwon Province plans to provide a variety of transportation services for domestic and foreign visitors to enjoy the Olympic games and enjoy Gangwon Province.

First, around the stadium, the general vehicles are controlled for the operation and safety of the games. For the convenience of the users of the general vehicles, a transfer parking lot will be provided free of charge to construct 4 places in Gangneung, 3 places in Pyeongchang and 1 place in Jeongseon, respectively, and shuttle buses connecting the stadiums will be made available.

For the convenience of travel within the host city, city bus routes are used for stadiums, traffic bases, accommodations. It is planned to carry out an extension service according to the schedule which ends in the night time, and for the visitors who stay in the satellite cities, there will be free shuttle buses connecting the stadiums within the 3 areas of Sokcho, Donghae, and Wonju.

Gangwon Province will continue to take measures to ensure that visitors can enjoy the Olympic games regardless of where they are staying – whether in the Olympic host city or the satellite cities. 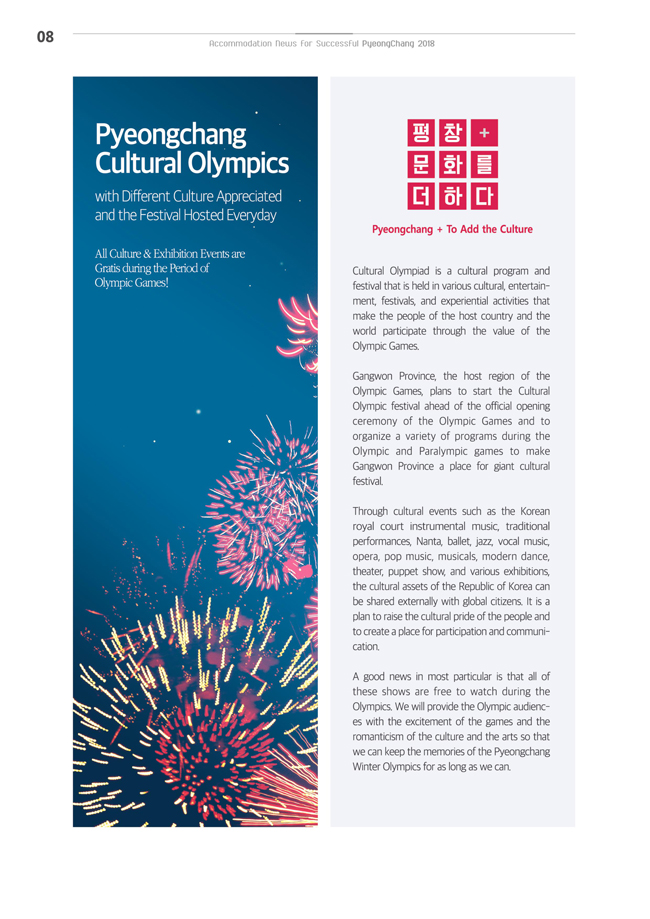 All Culture & Exhibition Events are Gratis during the Period of Olympic Games!

Pyeongchang + To Add the Culture

Cultural Olympiad is a cultural program and festival that is held in various cultural, entertainment, festivals, and experiential activities that make the people of the host country and the world participate through the value of the Olympic Games.

Through cultural events such as the Korean royal court instrumental music, traditional performances, Nanta, ballet, jazz, vocal music, opera, pop music, musicals, modern dance, theater, puppet show, and various exhibitions, the cultural assets of the Republic of Korea can be shared externally with global citizens. It is a plan to raise the cultural pride of the people and to create a place for participation and communication.

A good news in most particular is that all of these shows are free to watch during the Olympics. We will provide the Olympic audiences with the excitement of the games and the romanticism of the culture and the arts so that we can keep the memories of the Pyeongchang Winter Olympics for as long as we can. 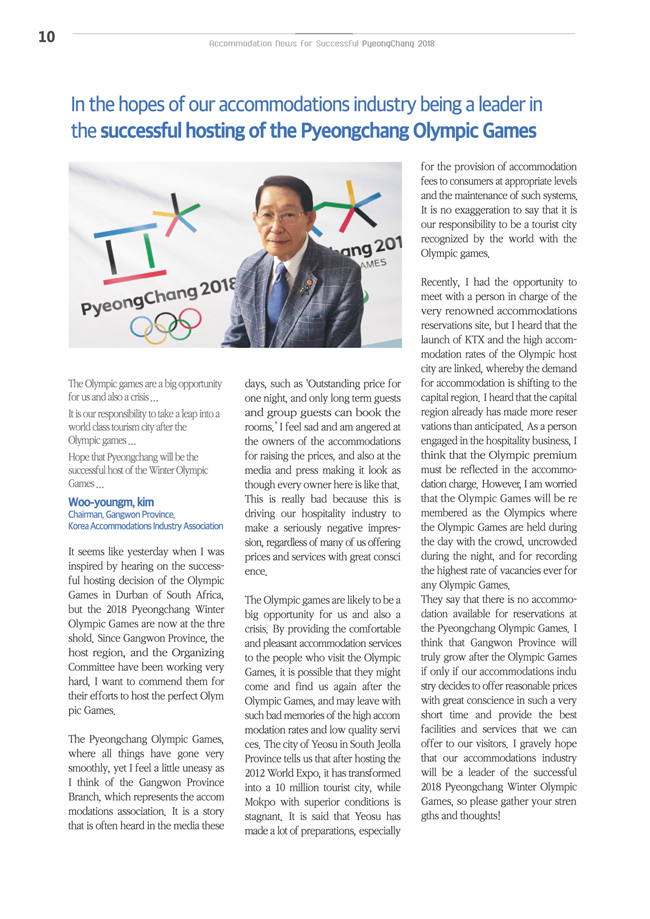 The Olympic games are a big opportunity for us and also a crisis ... It is our responsibility to take a leap into a world class tourism city after the Olympic games ... Hope that Pyeongchang will be the successful host of the Winter Olympic Games ...

It seems like yesterday when I was inspired by hearing on the successful hosting decision of the Olympic Games in Durban of South Africa, but the 2018 Pyeongchang Winter Olympic Games are now at the thre shold. Since Gangwon Province, the host region, and the Organizing Committee have been working very hard, I want to commend them for their efforts to host the perfect Olympic Games.

The Pyeongchang Olympic Games, where all things have gone very smoothly, yet I feel a little uneasy as I think of the Gangwon Province Branch, which represents the accommodations association. It is a story that is often heard in the media these days, such as 'Outstanding price for one night, and only long term guests and group guests can book the rooms.’ I feel sad and am angered at the owners of the accommodations for raising the prices, and also at the media and press making it look as though every owner here is like that. This is really bad because this is driving our hospitality industry to make a seriously negative impression, regardless of many of us offering prices and services with great conscience.

The Olympic games are likely to be a big opportunity for us and also a crisis. By providing the comfortable and pleasant accommodation services to the people who visit the Olympic Games, it is possible that they might come and find us again after the Olympic Games, and may leave with such bad memories of the high accommodation rates and low quality services. The city of Yeosu in South Jeolla Province tells us that after hosting the 2012 World Expo, it has transformed into a 10 million tourist city, while Mokpo with superior conditions is stagnant. It is said that Yeosu has made a lot of preparations, especially for the provision of accommodation fees to consumers at appropriate levels and the maintenance of such systems. It is no exaggeration to say that it is our responsibility to be a tourist city recognized by the world with the Olympic games. 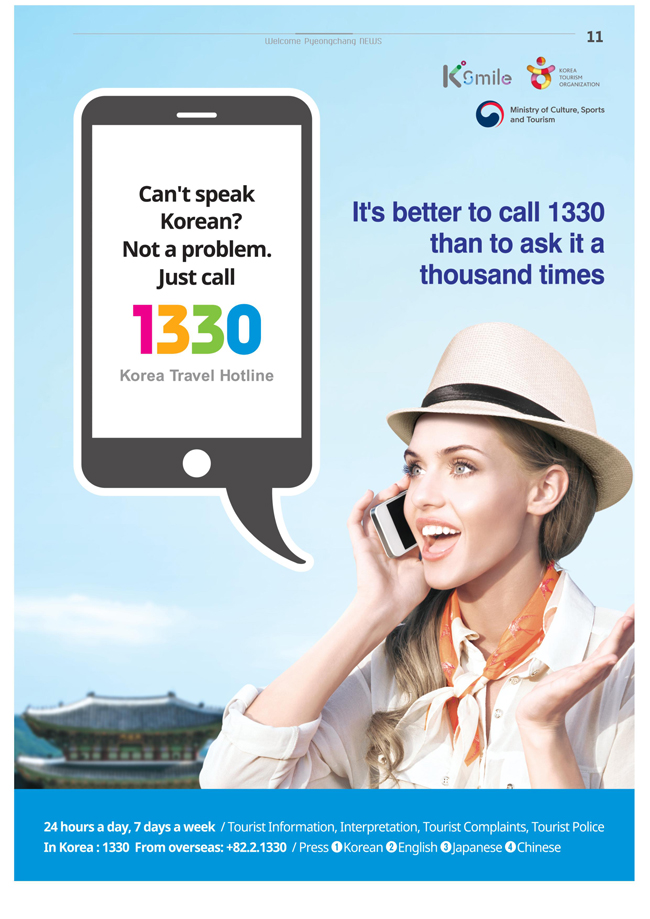